Bastien Vergnes-Taillefer, a profile that can please in blue 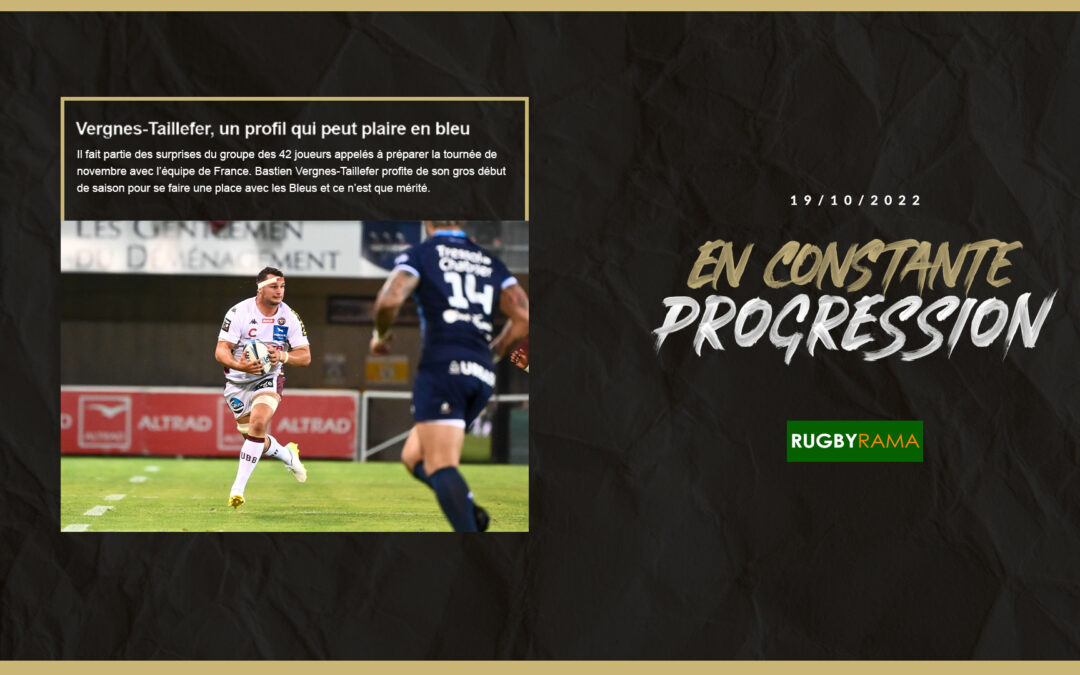 XV DE FRANCE - He is one of the surprises of the 42 players called to prepare the November tour with the French team. Bastien Vergnes-Taillefer is taking advantage of his great start to the season to make a place for himself with the French national team and it is only deserved. His profile and his state of mind could even be an asset to impose himself in this group, where the UFOs have their place.

It's a UFO that we didn't expect this fall. Bastien Taillefer is the last minute surprise guest in the 42-member France squad before the November tour. The third row from Bordeaux is taking advantage of Jordan Joseph's withdrawal to take his place in Marcoussis before the matches againstAustralia,Japan andSouth Africa. And even if he is not among the favorites to be included in the group of 23, this selection is a fair reward for the one who has shown great promise since his arrival in Gironde last season. Besides, we tend to forget it, but he was already part of the group that participated in the last summer tour of the XV de France, in Japan. But this call is of another level.

In the land of the rising sun, Fabien Galthié had to do without the finalists of the Top 14 and had proceeded, as we know, to a relative reshuffling of the staff to give his executives a break after a big season. But this time, Vergnes-Taillefer will try to prove himself among the cream of the crop of French players of the moment. "I'm very happy for him, it's great, congratulated UBB forwards coach Julien Laïrle. He is someone who had a great tour in Japan this summer. He has a profile that he can impose in the French team because he has a lot of activity. He likes to eat up the advantage line with his physical profile."

It is true that at the beginning of the season, the former player of Colomiers is one of the spearheads of theUnion Bordeaux-Bègles. Able to play as a flanker, but also as a third row center, he is one of those who constantly advance ball in hand. Thrown, he can break any defensive line. Like his last outings in Top 14, Vergnes-Taillefer knows how to distribute some big toffees.

"Defensively, he is someone who rises very quickly, who tackles hard. We saw it during the match against Racing 92", confirmed Laïrle. For the latter, who works with him on a daily basis, it is also and above all the profile of the third row that could allow him to make his mark with the Blues. "Next to Alldritt, Ollivon and all that, I think it is a rugby profile that can be complementary. Afterwards, he's a top guy in terms of mentality. He is hard-working, demanding, hard-working... He doesn't shy away from a task." In addition to all the qualities mentioned above, Vergnes-Taillfer, at 25 years old, is constantly progressing, just like his role in the touch.

If this season, the Bordeaux line-up has experienced some setbacks, with many absences, the 1m94 player has been very useful in this early season. In particular against Lyon, where he shared the third row with Rémi Lamerat - who obviously does not jump in the sidelines - Vergnes-Taillefer knew how to make the law in the air.

So despite all his qualities, it will be difficult for him to make a place in the starting XV, with the presence of Alldritt, Jelonch or Ollivon. But if he manages to impress, maybe he will manage to stand out from the competition of Bécognée, Tanga, Macalou or Cretin... Go figure! "If he will be part of the 14 or not, I don't really know, relativized Julien Laïrle. But this call is already a reward for the work. It is good for the player and also for the club. It proves that our players are here despite the somewhat critical start to the championship." AtMarcoussis, Verges-Taillefer may be a UFO, but he is not a stranger...

Read the article on Rugbyrama